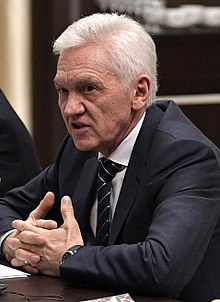 Gennady Nikolayevich Timchenko (also spelled Guennadi Timtchenko) (born 1952) is a Russian businessman and billionaire.[2] He founded and owns the private investment group, Volga Group, which specializes in investments in energy, transport and infrastructure assets. Previously he was a co-owner of Gunvor Group. In 2014, Timchenko was ranked 62nd on the Forbes magazine billionaires list, with an estimated fortune of $15.3 billion USD.[3] He is known for being the Chairman of the Board of Directors of the Kontinental Hockey League,[4] and President of the SKA (St. Petersburg) ice hockey club.[5] He is a citizen of Russia,[3] Finland and Armenia.[6][7][8]

Gennady Timchenko was born in Leninakan (now Gyumri), Armenian Soviet Socialist Republic (Soviet Union) in 1952. His father was in the Soviet military. He spent 6 years of his childhood (from 1959-1965) in the German Democratic Republic and learnt German.[9] and in the Ukrainian SSR.[10] In 1976 he graduated from the Mechanical Institute of St. Petersburg, then named Leningrad, as an electrical engineer, according to a 2008 interview with the Wall Street Journal.[10]

In 1977, Timchenko started to work as an engineer for the Izhorsky plant near St. Petersburg, which specialized in building power generators.[11] Since he spoke German, he was then moved to the trade department of this state-owned company.

In 1988, when Russia started to liberalize its economy, he was promoted to Deputy Director of state-owned oil company Kirishineftekhimexport, which had been created in 1987 based on the Kirishi refinery, one of the three largest refineries in the RSFSR.[13] Timchenko’s teams set up some first export routes of oil products from the USSR to Western countries and Timchenko became one of the leading figures of the Russian oil trading industry.

In 1991, Timchenko decided to leave Russia and was hired by a Finland-based company, Urals Finland Oy, specializing in importing Russian oil to Europe. He settled in Finland and became a Finnish citizen.[citation needed]

In 1997, he co-founded the global commodity trading company Gunvor with Swedish businessman Torbjörn Törnqvist.[12] He sold Törnqvist his stake in March 2014 a day before the US sanctions.[14]

In July 2013, he was appointed as a Chevalier of the Légion d’honneur for creating a permanent exhibition of Russian art in the Louvre, support for the Russian Museum in St Petersburg, and help in organizing the Alekhine Memorial chess tournament.[16]

In March 2014, following the Crimean status referendum, the U.S. Treasury put Timchenko on the Specially Designated Nationals List (SDN), a list of individuals sanctioned as “members of the Russian leadership’s inner circle.”[17][18][19][20][21] The sanctions freeze any assets he holds in the US[7] and ban him from entering the United States.[22]

He is married to Elena. They have three children. As of March 2014 Timchenko lives in Moscow, Russia, while his family resides in Switzerland.[23]:1 Gennady’s daughter Ksenia is married to Gleb Frank, son of Putin’s former transport minister Sergei Frank. They married in 2010. [24]

In a The Wall Street Journal interview, Timchenko said that in 1999 he gave up Russian citizenship and became a Finnish citizen.[25]

In 2004, the Helsingin Sanomat wrote that he acquired Finnish citizenship, and that he lived in Geneva at that time.[6] In an October 2012 interview with the Russian edition of Forbes Timchenko said that he had both Russian and Finnish citizenships.[citation needed] In August 2014, Timchenko said in an interview with ITAR-TASS that he needed Finnish citizenship to travel in the 1990s, when it was harder to travel on a Russian passport, and that he never concealed having two passports. He said that, over the past fourteen years, he had been paying taxes in Switzerland and prior to it, in Finland. “I scrupulously transfer to Russia the monies I owe to the Russian budget. In theory, I could have cut down the transfers citing the rule on inadmissibility of dual taxation but I never did this – I realized the proceeds that my monies were going off in wages to Russian doctors, teachers, and the military while I was not going to go bankrupt under any circumstances. I wouldn’t get poor if I shared the budget with others.”[8] The US Department of Treasury announcement of individuals under sanctions due to the 2014 Crimean crisis lists him as the citizen of Russia, Finland, and Armenia.[7]

According to Forbes magazine, Timchenko is one of the wealthiest people in Russia and the world:

In addition to business assets, Gennady Timchenko, according to media reports, also owns a property in Geneva, Switzerland, which consists of just over 1 ha of land, an internal area of 341m². According to the Land Registry Office of Geneva the purchase price of the property was SFR 8.4m (at the time of purchase in 2001 – about US$11m).[38][39]

His income, according to the Finnish tax authorities, increased tenfold from 1999 to 2001. In 2001 he declared an income of EUR 4.9m. Because of his high taxes, Gennady Timchenko moved to Switzerland in 2002.[40]

Gennady Timchenko was the co-founder (together with Torbjörn Törnqvist) of Gunvor Group, a corporation registered in Cyprus, and operating in trading and logistics related to the international energy market. On 19 March 2014 Gennady Timchenko sold his stake in Gunvor to the other co-founder, Torbjörn Törnqvist.[41][42] The sale was made the day before Timchenko was included on the United States sanctions list in the wake of the annexing of Crimea by Russia. Timchenko said he had sold his stake in anticipation of “potential economic sanctions” and to “ensure with certainty the continued and uninterrupted operations of Gunvor Group”.[42] The value of the transaction was not disclosed.[41]

In November 2014, The Wall Street Journal reported that the US Attorney’s Office for the Eastern District of New York is examining allegations about transactions in which Gunvor Group bought oil from Russia’s OAO Rosneft and sold it to third parties through the US financial system, which could have been illegal. Gunvor released a statement on 6 November denying any crime.[43]

In 2007 Gennady Timchenko founded the Luxembourg-based fund Volga Resources. The fund, which consolidates Timchenko’s assets, was renamed in June 2013 as Volga Group and introduced at the St Petersburg International Economic Forum.[44] He noted that, for the next few years, his group will focus on the development of infrastructure projects in Russia.[45]

The purpose of this fund is “based on direct and indirect investments in value-driven assets in Russia and internationally that produce consistent, long-term returns”.[46] The group owns assets in the energy, transportation and infrastructure development, as well as financial services, consumer goods and real estate. Its most notable investments are in gas company Novatek and petrochemical company Sibur.

Volga Group has been listed by the US Dept of Treasury (OFAC – Office of Foreign Assets Control) as a SDN (specially Designated Nationals) in the Ukraine-related sanction lists of 2014.[48]

In July 2013, together with the brothers Arkady Rotenberg and Boris Rotenberg, Gennady Timchenko established Arena Events Oy, which bought 100% of Helsinki’s Hartwall Areena.[49] They also bought a stake in Jokerit, the six-time national champion of the Finnish top-level ice hockey league Liiga. Consequently, Jokerit transferred to the Kontinental Hockey League for the 2014-15 season and they play in the Western Conference in Bobrov division.[50] They also own the large sport hall Hartwall Areena in Helsinki.[47] This is connected to a multi-storey car park, with capacity of 1,421 private vehicles.[citation needed]

In 2007, Timchenko and the company Surgutex founded the Kluch charitable foundation, which develops professional foster homes in Leningrad, Tambov and Ryazan regions.[54][55]

In 2008, Gennady and Elena Timchenko founded the Neva Foundation in Geneva,[56] in order to promote and finance cultural projects in Switzerland and Russia.[57] The foundation has focused on lyrical art and a partnership with the Geneva Opera House. Renowned St Petersburg Philharmonic conductor Yuri Temirkanov has been a trustee.[58]

In 2010, Gennady and Elena Timchenko created the Ladoga Foundation.[2][59][60] The main activity of the fund has been s providing help for the elderly, as well as the restoration of spiritual and cultural heritage monuments, support for cultural projects and project support in the field of modern medical technology. In September 2013 the Ladoga Foundation was renamed to the Elena and Gennady Timchenko Foundation (or just Timchenko Foundation for short).[61] consolidating all their charitable activities and supporting elderly people, sports, culture and foster families.

In 2011, Timchenko was elected Chairman of the Economic Council of the Franco-Russian Chamber of Commerce (CCIFR).[62][63]

In 2011, Timchenko, was appointed Chairman of the Board of Directors and President of SKA (St. Petersburg), the leading ice hockey team.[5]

In 2012 he was appointed Chairman of the Board of Directors of the Continental Hockey League (KHL).[4]

He serves on the board of trustees of the Jewish Museum and Tolerance Center in Moscow.[64]

Timchenko likes to play and watch tennis. Through his formerly-owned Finnish company, IPP, he has sponsored an outdoor tennis tournament in Finland since 2000, the IPP Open. According to unconfirmed reports[clarification needed] he funded the Finnish national team in the Davis Cup [65] and has sponsored a number of Russian tennis players.[66]

The media has mentioned him sponsoring a sailing team which participates in the international RC44 yachting competition.[65]

In April 2011, Timchenko replaced Alexander Medvedev as Chairman of the Board of Directors of SKA (Saint Petersburg), the St Petersburg-based ice hockey club. In May of the same year, under the new management structure of the club, he was appointed as Club President.[5]

In July 2012, he replaced Vyacheslav Fetisov as Chairman of the Board of Directors of the Continental Hockey League KHL.[4]

In 2013, he became one of the sponsors and organisers of one of the most important international chess tournaments in the ELO rating – the Alekhine Memorial.[67]

The Timchenko Foundation promotes the development of the ice hockey and chess among young people.[68]

On 12 October 2013 Timchenko received French title of the Cavalier of Legion of Honour.[69][70] This award prompted Russian political writer Andrey Piontkovsky to write that “awarding a criminal with nickname Gangrene the highest distinction brings shame to the French state” [71]