Born in Northern Ireland, Grosvenor moved from an island in the middle of Lough Erne to be educated at Sunningdale and Harrow boarding schools in the south of England. After a troubled education he left school with two O-levels. He joined the Royal Military Academy Sandhurst and served in the Territorial Army, where he was promoted to major-general in 2004.

Via Grosvenor Estates, the business he inherited along with the dukedom in 1979, the Duke was the richest property developer in the United Kingdom and one of the country’s largest landowners, with property in Edinburgh, Liverpool, Oxford, Cambridge, Southampton and Cheshire, including the family’s country seat of Eaton Hall, as well as 300 acres (0.47 sq mi) of Mayfair and Belgravia in Central London.[2] The business also has interests in other parts of Europe. According to the Sunday Times Rich List 2016, the Duke was worth £9.35 billion (around US$13 billion), placing him sixth in the list and making him the third-richest British citizen.

The Duke died on 9 August 2016 after suffering a heart attack. The title then passed to his son, Hugh Grosvenor.

The Grosvenor family’s first development was in Mayfair, Central London, in the early 18th century; the second big development came around 100 years later and was in another exclusive part of London – Belgravia, developed by the family after the end of Napoleonic Wars and the conversion of Buckingham Palace – which is just one mile East. After developing the two parts of Central London, the family business expanded. During the second half of the 20th century, the business expanded into the Americas and developed Annacis Island and Vancouver in Canada in the 1950s. The family business started developing in Australia in the 1960s. They moved to Asia in the early 1990s and to continental Europe just before the millennium. In April 2000, the firm moved into new London offices. The business was headed by the 6th Duke, who was Chairman of the Trustees.[3]

As a child the Duke lived on an island in the middle of Lower Lough Erne in Ulster (Ely Lodge, Blaney, Co. Fermanagh). His early education was in Northern Ireland before he attended Sunningdale and Harrow boarding schools in England. Because of his northern Irish accent, the Duke struggled to fit in at Harrow, and his education suffered.[5] He left school with two O-levels in history and English.[6][7]

As the Earl Grosvenor he joined the Territorial Army in 1970, as a trooper, family estate responsibilities having caused him to abandon a Regular Army career in the 9th/12th Lancers.[8] After entering RMA Sandhurst in 1973, he passed out as an officer cadet and was commissioned a second lieutenantin the Territorial and Army Volunteer Reserve of the Royal Armoured Corps (Queen’s Own Yeomanry) on 13 May 1973.[9][10] He was promoted to lieutenant on 13 May 1975 and to captain on 1 July 1980.[11][12] He was promoted to the acting rank of major on 1 January 1985 and to the substantive rank on 22 December.[13]

Promoted to lieutenant-colonel on 1 April 1992, he subsequently commanded the North Irish Horse, the Cheshire Yeomanry Squadron, founded by his ancestors, and the Queen’s Own Yeomanry.[14] He was promoted to colonel on 31 December 1994 and was appointed honorary colonel of the 7th Regt Army Air Corps (1 January 1996) and the Northumbrian Universities Officer Training Corps (30 November 1995).[15][16][17] Promoted to brigadier on 17 January 2000, he was also appointed Honorary Colonel of the Royal Mercian and Lancastrian Yeomanry on 14 May 2001.[18][19] He was also appointed Colonel-in-Chief of the Canadian Royal Westminster Regiment, the North Irish Horse, and as Colonel Commandant Yeomanry.

The Duke was Grand Prior of the Priory of England of the Military and Hospitaller Order of St Lazarus of Jerusalem, 1995–2001.[20] In 2004, he was appointed to the new post of Assistant Chief of the Defence Staff (Reserves and Cadets), with promotion in the rank of major-general. In March 2007, having served in the Ministry of Defence as Assistant CDS for four years, he handed over responsibility for 50,000 reservists and 138,000 cadets to Major General Simon Lalor, in the wake of the Eliot Spitzer prostitution scandal in which Grosvenor was also implicated.[21] The Duke became Deputy Commander Land Forces (Reserves) in May 2011.[22] He retired from the Armed Forces in 2012.

In 2011, having already funded a feasibility study, the Duke purchased the estate at Stanford Hall, Nottinghamshire to make possible the creation of a Defence and National Rehabilitation Centre (DNRC) to provide the highest quality support for military casualties.[23] Work started on the £300m project in April 2016,[24] and it is intended that the new facilities which are under construction for completion in 2018 will replace those at Headley Court.[25][26] The Duke remained actively involved in the project until his death.[27]

He was Vice-President of the Royal United Services Institute from 1993 until 2012, President of The Tank Museum, Bovington, from 2002, and a committee member of the National Army Museumbetween 1988–97 and from 2013 until his death.[4]

He was a supporter of the Prince’s Trust, and was a committee member of the Trust and a Patron from 2001 for North West England.[4]

His main personal recreations were field shooting and fishing, and he served as President of the British Association for Shooting and Conservation from 1992 until 2000, and the Atlantic Salmon Trust from 2004 until his death, President of the Game and Wildlife Conservancy Trust for 2000–01 and Vice-President hence. He was a member of the MCC and Royal Yacht Squadron and President of Worcestershire County Cricket Club in 1984–86 and of the Youth Sports Trust 1996–2004.[4]

He was President of the committee planning the 2002 Commonwealth Games in Manchester from 1998, and from 1991 until 1994 had been Director of the committee set up to coordinate the projected 2000 Summer Olympic Games and Paralympics that would have been held at Manchester had the British bid succeeded.[4] 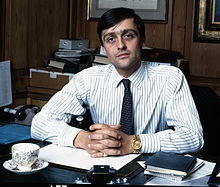 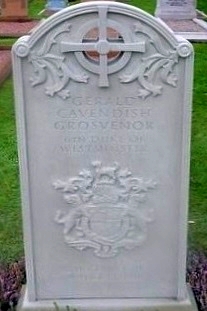 The 6th Duke of Westminster’s grave

The Duke of Westminster married Natalia Ayesha Phillips, the daughter of Lt-Col. Harold Pedro Joseph Phillips and his wife Georgina Wernher, in 1978. His wife is a direct descendant of the Russian poet Alexander Sergeyevich Pushkin and therefore of his African ancestor Abram Gannibal as well as of King George II. Their children are:

In 1998, the Duke suffered a nervous breakdown and depression, citing the overwhelming pressures of business and public life.[7]

The Duke died on 9 August 2016 at Royal Preston Hospital in Preston, Lancashire, after suffering a heart attack at his Abbeystead estate.[34][35] A private funeral attended by close relatives was held on 12 August, and a memorial service was held at Chester Cathedral on 28 November.[36] He is buried in the family plot at St Mary’s Church, Eccleston.[37]

The fact that Grosvenor’s family stand to pay very little if any inheritance tax on his £9bn+ fortune has led to calls for a review of how the inheritance of trust funds and similar assets are handled in the UK.[38][39][40][41]