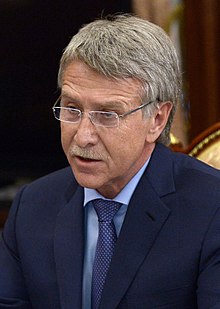 Born to a Jewish family,[4] Mikhelson began his career as an engineer after[5] graduating with a degree in Industrial Civil Engineering from the Samara Institute of Civil Engineering in 1977. He started working as a[6] foreman at a construction and assembling company in the Tyumen area of Siberia. One of his[7] initial projects was work on the Urengoi-Chelyabinsk gas pipeline. In 1985, he was[7] appointed as Chief Engineer of Ryazantruboprovodstroy. In 1987, he became General Director of Kuibishevtruboprovodstroy. In 1991, Kuibishevtruboprovodstroy was one of the first companies to undergo privatization after the dissolution of the Soviet Union.

Mikhelson continued as Managing Director at the company, which has been renamed NOVA, until October 1994. He then became General Director of its holding company, Novafinivest, which later became known as NOVATEK. From 2008 until 2010 Mikhelson was Chairman of the Board of Directors for OAO Stroytransgas and OOO Art Finance. He currently holds the position of Chairman of the Board of Directors of ZAO SIBUR and serves on the Supervisory Board of OAO Russian Regional Development Bank.

SIBUR is a gas processing and petrochemicals company operating 26 production sites across Russia with headquarters in Moscow. Mikhelson owns 57.5% interest in Sibur. He also holds a 25% stake in Novatek.[8]

He also owns the megayacht Pacific.[9]

Mikhelson has a strong interest in art, stating that “99 per cent” of his interest is in Russian and contemporary art.[10] He also established his own foundation, the V-A-C Foundation, which promotes contemporary Russian art, and has international ties with the New Museum in New York, the Tate museums in the UK , and London’s Whitechapel gallery.[11] In May 2017, the foundation also opened an exhibition space in Venice and work is underway to develop V-A-C’s first major art centre in Moscow, whose main site is an historic power station on the banks of the Moskva River. Designed by Renzo Piano Building Workshop, the new centre for contemporary arts and culture in Moscow is due to open in 2019.[12]

Mikhelson is the recipient of the Russian Federation’s Order of the Badge of Honor.[17][18]

Mikhelson is married, with two children, and lives in Moscow.[1] His daughter Victoria studied art history at New York University and London’s Courtauld Institute.[19] His VAC Foundation Victoria, the Art of Being Contemporary, is named after her.[19]