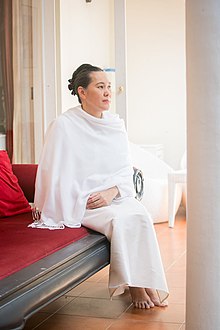 “If all of us would spend 15 minutes a day deleting unnecessary digital data from social media and old emails, the world would cool down ”  .~w:Acharavadee Wongsakon

Acharavadee Wongsakon is a Thai lay Buddhist teacher and former entrepreneur who teaches a form of Vipassana meditation called Techo Vipassana Meditation. She teaches this method to laypersons and ordained buddhist monks at various Techo Vipassana centers throughout Thailand. She is the founder of the Knowing Buddha Organization, which campaigns against disrespectful uses of Buddha imagery and the general decline of morality in society.[1] Acharvadee and the Knowing Buddha Foundation have been endorsed by the National Office of Buddhism.

Acharavadee Wongsakon was born in Bangkok Thailand September 28, 1965, she is a Thai Buddhist Vipassana Meditation Master best known for her efforts in protecting Buddhism and raising awareness about the declining Buddhist morality in Thailand and globally.[2] Acharavdee believes that raising globalmorality, can lead to the cessation of many of the world’s most difficult problems. Acharavadee is an award-winning business woman and Thai socialite. Acharavadee Wongsakon, established herself and company as a premier player in the Asian diamond jewelry design business, developing and basing her brand Saint Tropez Diamond out of Bangkok Thailand. Ms. Acharavadee took up mediation practice to help cope with the stresses of business life and celebrity. Vipassana Meditation practice lead Acharavadee to reevaluate her life and priorities and eventually withdrew herself from the social stage and business world.[3]

Acharavadee sold her company, using the money to open the School of Life, a school for children, where she became a Dhamma teacher, teaching children for free. Master Acharavadee established the Knowing Buddha Organization, a non-profit organization. Acharavadee Wongsakon, through the Knowing Buddha Organization, works on protecting the use of Buddha’s image worldwide. “Respect is Common Sense” is the slogan of the organization, which views Buddha as the father of the Buddhist religion.[4] Ms. Acharavadee, during 2006 visit to Buddha bar in Paris, witnessed the disrespect of the Image of Buddha in a popular night club, which prompted her to establish The Knowing Buddha Organization (KBO) to raise global awareness that Buddha is the father of the Buddhist religion and Buddha’s image should not be treated as decoration or used to promote the sale of alcohol.[5] Some of the companies Knowing Buddha has cooperated with to stop the misuse of Buddha images as decoration are; Louis Vuitton and Disney Pictures.[6] Other campaigns promoted by Acharavadee and the Knowing Buddha Organization is to bring awareness to the problem of accelerated climate change, resulting from the overuse of cloud storageglobally, fueled by selfie photos and exponential increase in cloud data storage on platforms such an Instagram and Facebook. Estimates are that by 2025 to use 1/5th world electrical consumption from cloud storage will reach 20% of total consumption.[7][8] Acharavadee is known in the Kingdom of Thailand as voice on Buddhist morality in society. “Tan Ajahn”, as she is referred to by her students, represents a Buddhist matriarchal voice for morality in Thai Society and encourages people to pay their fair share of taxes to give back to the country that supports peoples’ lives and maintain a high code of conduct. Acharavadee is a bestselling author in Thailand and publishing both in Thai and English language books on Buddhism and Buddhist Morality. Most notable works, “Awaken from the Madness” and “Top Ideas in Buddhism”.[9]

Acharavadee’s KBO Earth Climate campaign is aimed at reducing the global storage of unnecessary digital data generated daily, by the billions of Instagram and Facebook users resulting in internet induced climate change at term coined by Acharvadee to describe the global phenomena.[10]

Acharavadee Wongsakon was born to Mr. Chaiyong and Mrs. Somjit Wongsakon, on September 28, 1965 in Bangkok Noi District, Bangkok. Acharavadee enjoyed a simple upbringing Thai Family style in the Kingdom of Thailand near the banks of the Chao Phraya River in Bangkok. Educated in public schools She attended Suwannaramwittayakom School and Sripatum University.

Acharavadee Wongsakon In 2005, became an award-winning jewelry designer and business personality, establishing the Saint Tropez Diamond Company in Bangkok, and selling collection of high fashion jewelry inspired by the luxury and unique style of Saint Tropez France. Acharavadee Wongskon’s collections caused a sensation in Asia, catapulting her and her company to overnight success and thrust Acharavadee into the social limelight. Ms. Acharavadee was Listed by Thailand Thatler Magazine for 5 years consecutively as one of 500 leading business persons of the year from 2003 -2007.

Due to the demands and stresses of her business and new found celebrity, Acharavadee practiced Vipassana Mediation under the principle of meditation Master S.N.Goenka for 6 years.

Acharavadee credits Vipassana Meditation with awakening her from the madness and realize there was more to life than of her business and social status. In 2008 Acharavadee decided to sell her business and quietly withdraw from social life to devote her life to teaching Buddhism, morality and practicing meditation. Acharavadee renounced her social status by selling her designer clothing and jewelry, vowing to live a simple layperson life without the trappings addiction to wealth or status. Acharavadee continued her rigorous meditation practice and dedicated herself to promoting Buddhism and contributing to society. With proceeds from the sale of her business, Acharavadee purchased land in central Bangkok and established the School of Life Foundation, teaching Dhamma to children and teenagers without any charge. She taught children the importance of morality and to always rely their own experiences in life, instead of memorizing from words in textbooks.[11] Acharavadee guided her students with the correct way of living and with right view towards the world. Acharavadee’s teachings at School of Life captured the interest of many in Thai Society, eventually leading her to open Mediation centers throughout Thailand aimed at teaching adult students these same values.[12]

In 2011 Acharavadee Wongsakon began to teach the Techo Vipassana technique to students. After nine years rigorous Vipassana meditation practice, Acharavadee established Techo Vipassana Dhamma Path. Acharavadee sold the rest of her worldly possessions and purchased land at the foothills of Phra Phutthabat Noi in Kaeng Koi District, Saraburi Province, Thailandwhere she established her first Techo Vipassana retreat. Techo Vipassana is meditation practice that follows the Four Foundations of Mindfulness practice, using the technique of igniting the fire element in the body to burn down Kilesa ( mental impurities). Acharavadee credits the late Somdej Phra Puttajarn Toh Phrommarangsi (SomdejToh) for teaching her this technique during one of her mediations. Phra Somdej Toh is a highly revered Thai monk, known among Thais for his kindness, wisdom and supernatural powers. This technique uses focused meditation using mindfulness and the body’s fire element burn away mental impurities (Kilesa) Acharavadee teaches this method as a direct shortcut that leads to the end of cycle of rebirth Nirvana Acharavadee Wongsakon dedicated the Techo Vipassana retreat to Triple Gem of Buddhism. Tan Ajan teaches Techo Vipassana Meditation and Dhamma to domestic and foreign students for free providing them food and accommodation also free of charge. The first Techo Vipassana course was held on January 25, 2011 and continues to held regularly.

By 2018 Master Acharavadee had taught over 134 courses over 7 years to over 7,000 mediation practitioners. Thais and foreigners, ascetics, and laypersons, have attended and completed Acharavadee’s courses.

In 2014 Acharavadee established the 5000s Magazine, with the idea that there should be a magazine for modern Buddhist demonstration that Dhamma and a modern lifestyle can be complimentary to each other. The magazine presents images examples and teachings for modern Buddhism in today’s society. The magazine is meant to inspire readers to live their lives appropriately and with Buddhist values in order maximize the quality of their lives at every level.

Meditation Master Acharavadee Wongsakon is best selling Thai and International author. Her books include Thai and English titles publishing since 2005

5000s Magazine is a Bilingual (Thai / English) High quality Magazine, developed for Thai and English speaking Buddhist and others to show Buddhists a representations of a modern Lifestyle which combines Buddhist moral values and Dhamma. The magazine through photos, interviews and stories gives readers an illustrations for living their life with morality and Buddhist faith, in a fast-paced modern thai society.

Acharavadee Wongsakon’s strong voice of Buddhist morality has made her a controversial figure in Thailand. Acharavadee, publicly criticized some of Thai Buddhist clergy for not adhering to the strict Buddhist practices and conduct. This led to Acharavadee being disparaged by the media and by some of the male dominated Buddhist establishment. Thai culture prohibits women from criticizing monks, even if the criticism if well founded. The Thai Media have accused Acharavadee of acting superior towards monks and alleged that Acharavadee’s monk students have bowed to their female teacher. The act of a Thai monk bowing to any female is considered taboo.[13]

Acharavadee’s critics were silenced, when the National Office of Buddhism investigated and later endorsed Acharvadee Wongsakon and her foundation, the Knowing Buddha Organization.[14] A top official of Mahamakut Buddhist University foundation subsequently practiced Techo Vipassana Mediation under Acharavadee Wongsakon, confirming this method as a correct path to Enlightenment.[15]