Jaggi Vasudev (born 3 September 1957), commonly known as Sadhguru, is an Indian yogi, mystic[2] and New York Times bestselling author.[3] He founded the Isha Foundation, a non-profit organization which offers Yoga programs around the world[4] and is involved in social outreach,[5]education[6] and environmental initiatives.[7][8]

Sadhguru was conferred the Padma Vibhushan civilian award by the Government of India on 13 April 2017 in recognition of his contribution towards human advancement.[9]

Born in Mysore, Karnataka, India, Sadhguru was the youngest of four children – two boys and two girls. His father was an ophthalmologist with the Indian Railways and as a result, the family moved frequently. At the age of 10, he came in contact with Malladihalli Sri Raghavendra Swamiji who taught him a set of simple yoga asanas, the practice of which he regularly maintained.[10] He states that “without a single day’s break, this simple yoga that was taught to me kept happening and led to a much deeper experience later.”[11]:39

After his schooling at Demonstration School and Mahajana Pre-University College, Mysore in 1973, he graduated from the University of Mysore with a bachelor’s degree in English literature.[12]During his college years, he developed an interest in travel and motorcycles.[13]

At the age of 25 on 23 September 1982,[14] he rode up Chamundi Hill and sat on a rock, where he had a spiritual experience. He describes his experience as follows:

Till that moment in my life I always thought this is me and that’s somebody else and something else. But for the first time I did not know which is me and which is not me. Suddenly, what was me was just all over the place. The very rock on which I was sitting, the air that I breathe, the very atmosphere around me, I had just exploded into everything. That sounds like utter insanity. This, I thought it lasted for ten to fifteen minutes but when I came back to my normal consciousness, it was about four-and-a-half-hours I was sitting there, fully conscious, eyes open, but time had just flipped.[15]:04:04

Six weeks after this experience, he left his business to his friend and travelled extensively in an effort to gain insight into his mystical experience. After about a year of meditation and travel, he decided to teach yoga to share his inner experience.[14]

In 1983, he conducted his first yoga class with seven participants in Mysore. Over time, he began conducting yoga classes across Karnataka and Hyderabad traveling from class to class on his motorcycle. He lived off the produce of his poultry farm rental and refused payment for the classes. A usual practice of his was to donate the collections received from participants to a local charity on the last day of the class.[14] These initial programs were the basic format on which the Isha Yoga classes were later built.[citation needed]

The Dhyanalinga at the Isha Yoga Center

In 1994, Sadhguru conducted the first program in the premises of the newly established Isha Yoga Center, described the Dhyanalinga. The Dhyanalinga is a yogic temple and a space for meditation, the consecration of which, Sadhguru stated was his life’s mission entrusted to him by his guru.[14] In 1998, the stone edifice of the linga was ordered and arrived at the ashram. After three years of work, the Dhyanalinga was completed on 23 June 1999[16] and opened to the public on 23 November.[17]
The Dhyanalinga offers a meditative space that does not ascribe to any particular faith or belief system.[18] A 76-foot dome, constructed using bricks and stabilised mud mortar without steel or concrete,[19] covers the sanctum sanctorum. The lingam is 13 feet and 9 inches in height and made of black granite. The Sarva Dharma Sthamba, located at the front entrance, functions as an icon of singularity, with the sculptural reliefs and symbols of Hinduism, Islam, Christianity, Sikhism, Jainism, Taoism, Zoroastrianism, Judaism, Buddhism, and Shinto inscribed as a universal welcome.[20]

Yoga programs and other consecrations[edit] 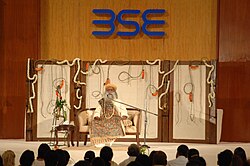 The programs are offered under the umbrella of Isha Yoga. The word Isha means “the formless divine”.[28] Isha yoga’s flagship program is ‘Inner Engineering’, which introduces people to meditation and pranayam and the Shambhavi Mahamudra.[29] He also conducts yoga classes for corporate leadership to introduce them to what he calls “inclusive economics”, which he says introduces a sense of compassion and inclusiveness into today’s economic scenario.[30][31]

He also regularly conducts Mahasathsangs in Tamil Nadu and Karnataka. Here he gives talks, teaches meditation, and holds question and answer sessions with the audience. These Mahasathsangs are also used as platforms to encourage tree-planting activities as well.[32] He also takes spiritual aspirants on annual yatras to Mount Kailash and the Himalayas. The Kailash Yatra led by him is among the largest groups to make the trip to Kailash, with 514 pilgrims attending the journey in 2010.[33][34]

Sadhguru organises all-night Mahashivarathri celebrations every year at the Isha Yoga Center. It’s estimated that these celebrations were attended by as many as 800,000 people in 2013.[35][36][37]The night includes music, dance, and guided meditation. In 2013, performers included Carnatic singer Aruna Sairam, dancer Anita Ratnam, and the band The Raghu Dixit Project.[37]

In March 2005, construction of the Isha Institute of Inner-sciences (III) in McMinnville, Tennessee, USA was begun and was completed 6 months later. Sadhguru had decided to establish III as a Center for spiritual growth in the Western Hemisphere. On 7 November 2008, he consecrated the Mahima Hall, a 39,000 square foot, free-standing meditation hall at the III. Mahima Hall is the largest meditation hall in the Western Hemisphere.[38] On 30 January 2010, he consecrated the Linga Bhairavi, a representation of the feminine aspects of the divine at the Isha Yoga Center.[11]

Saplings being readied for transportation at a PGH nursery.

Sadhguru established the Isha Foundation, a non religious, non-profit organisation entirely run by volunteers. Isha Yoga Center near Coimbatore was founded in 1993, and hosts a series of programs to heighten self-awareness through Yoga. The foundation works in tandem with International bodies like the Economic and Social Council of the United Nations.[39]

Action for Rural Rejuvenation (ARR) is an initiative of the Isha Foundation that aims to improve the overall health and quality of life of the rural poor. ARR was established in 2003 and seeks to benefit 70 million people in 54,000 villages across South India. As of 2010, ARR has reached over 4,200 villages and a population of over 7 million people.[40][41] He has also been involved with agricultural and farmers’ associations to work towards resolving issues faced by Indian farmers.[42]

Isha Vidhya, is Isha Foundation’s educational initiative, which aims to raise the level of education and improve literacy in rural India. There are seven schools in operation which educate around 7,000 students.[43] The foundation has also “adopted” 512 government schools to reach out to students from financially constrained backgrounds, and aims to adopt up to 3,000 schools.[44][45]

He is also the founder of Project GreenHands (PGH), a grassroots ecological initiative which was awarded the Indira Gandhi Paryavaran Puraskar, by the Government of India in June 2010.[47]PGH aims to increase the green cover in Tamil Nadu by 10% and has successfully overseen the planting of more than 27 million trees by over 2 million volunteers.[48] In an interview with National Geographic Green magazine, he explained the impetus which led him to establish Project GreenHands: “In the year 1998, certain experts […] made a prediction, by 2025, 60% of Tamil Nadu will be a desert. […] I decided to drive across Tamil Nadu and see for myself if this is true. […] I realized they were completely wrong because it wouldn’t go to 2025, it would happen much faster according to me. […] So from ’98 to 2003, 2004, I went about planting trees in people’s minds. And since 2004, we [have been] transplanting those trees back to the ground.”[49]

Rally for Rivers was a campaign launched by the Isha Foundation in 2017 to revive the dying rivers of India.[50] By March 2018, 160 million people had supported the campaign.[51][52] Sadhguru led a convoy across sixteen of the most affected states throughout September to spread awareness among citizens about the condition of rivers and the need for a long-term policy,[53] which contains afforestation of river banks and microirrigation in farming as the major points.[54][55] Garnering support from citizens was aimed at motivating the Central and State governments of India to work in concurrence and set a national policy for protecting rivers.[56][57] A policy document,[58] drafted by the Isha Foundation in collaboration with scientists and lawmakers,[59][60] contained steps for rejuvenating the ecology, agriculture and economy in the rivers and their basins.[56][55] The rally culminated in New Delhi on 2 October 2017 in the presence of the Vice-President of India[61]Mr.Muppavarapu Venkaiah Naidu. Sadhguru submitted the draft policy recommendation to the Prime Minister of India the next day.[62]

Six states signed Memorandums of Understanding (MoU) with Isha Foundation to plant trees along river banks. These states are Karnataka, Assam, Chhattisgarh, Punjab, Maharashtra and Gujarat.[63][64][65][66][67][68] The Niti Aayog and the Ministry of Water Resources have constituted committees to study the draft policy proposal.[67][69] In November, at a conference in Germany, the executive director of the United Nations Environmental Program, Erik Solheim discussed Rally for Rivers with Sadhguru, and how environmental programs around the world can emulate its success.[70]

Participation in global and economic forums[edit]

KV Kamath, who was present at the Isha Insight program.

Sadhguru spoke at the United Nations Millennium World Peace Summit in 2000,[73] the World Economic Forum in 2006, 2007, 2008 and 2009.[74][75] On 24 June 2013, he conducted a multi-religious session titled, “Interfaith Deliberations on the Universality of Religions” at the Isha Yoga Center, which was attended by representatives of various religions, and coincided with the fourteenth anniversary celebrations of the Dhyanalinga.[76][77]

In 2012, he was voted among the hundred most powerful Indians for his contribution in the field of environmental protection and for encouraging public participation in ecological issues.[78] He was also a participant in the 2006 documentary film ONE: The Movie. He has been involved in one-on-one interactions as part of the “In Conversations With the Mystic.”[79]

In 2012, he initiated the Isha Insight program, which focuses on helping small and medium businesses scale up their business activities. The program was conducted by Ram Charan with KV Kamath, Grandhi Mallikarjuna Rao, Shankar Annaswamy, Vellayan Subbiah and Pramod Chaudhari also active in the program.[80] In an interview with Forbesmagazine, speaking about the motivation behind setting up the program, he said, “While speaking at economic summits and to leaders in India and outside, I have noticed that the most serious issue people have is a lack of insight into what they are doing, or what they could do. That’s how we ended up creating this programme called Insight.”[81]

In 2017, he spoke [82] at the Global Landscapes Forum in Bonn, Germany, where he was also interviewed by Erik Solheim [83], head of United Nations Environment Programme.

Sadhguru designed the 112-foot statue of Adiyogi, which is located at the Isha Yoga Center. The statue depicts “the first yogi”. It was inaugurated on Mahashivaratri, 24 February 2017, by the Prime Minister of India, Narendra Modi.[84] The Adiyogi statue depicts Shiva as the first yogi or Adiyogi, and first Guru or Adi Guru, who offered yoga to humanity. The statue was built by Isha Foundation using 20,000 individual iron plates supplied by Steel Authority of India[85] and weighs around 500 tonnes (490 long tons; 550 short tons). The Adiyogi Shiva Statue has been recognized as the “Largest Bust Sculpture” by Guinness World Records.[86] A consecrated Shivalinga called “Yogeshwar Linga” is placed in front of the Adiyogi Shiva statue.[87]

Sadhguru notes that the statue is for inspiring people to take up yoga. The Ministry of Tourism, Government of India has included the consecration of the statue in its official Incredible India campaign as a destination.[88]

Sadhguru is the author of several books, including Inner Engineering: A Yogi’s Guide to Joy. The book tour in North America included 17 cities, and the launch events were attended by an estimated 26,000 people.[89][90]