Karl Hans Albrecht (German: [ˈalbʁɛçt]; 20 February 1920 – 16 July 2014) was a German entrepreneur who founded the discount supermarket chain Aldi with his brother Theo. He was for many years the richest person in Germany. As of February 2014, he was ranked as 21st-richest person in the world by Hurun Report.[1] 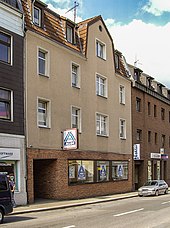 Karl and Theo Albrecht were born and raised in a Catholic[2] family in modest circumstances in Essen, Germany. Their father, Karl Sr, was employed as a miner and later as a baker’s assistant.[3] Their mother Anna, née Siepmann, had a small grocery store in the worker’s quarter of Schonnebeck (de), a suburb of Essen. Theo completed an apprenticeship in his mother’s store, while Karl worked in a delicatessen shop. Karl served in the Wehrmacht during World War II and was wounded on the Eastern Front. After the war, the brothers jointly took over their mother’s business and founded Albrecht KG.[4] They separated that company in 1961 into Aldi Nord, covering the part of Germany north of the Ruhr under Theo Albrecht, and Aldi Süd under Karl. The first Aldi (short for Albrecht Discount) was opened in 1962.[5]

In 1994, Karl Albrecht removed himself from the daily operations of Aldi Süd and took the position of chairman of the board until 2002. At the beginning of 2002, he also relinquished this position, thereby completely ceding control of the firm. Today, the business is no longer run by any of Karl Albrecht’s family members.[6]

Karl Albrecht was a very reclusive man who had not taken part in public life for several years prior to his death. As a result, little is known about him. Forbes magazine reported that he had two children, neither of whom was employed by Aldi. He reportedly lived in Essen, as did his brother Theo until the latter’s death. Golf was one of his hobbies, and Albrecht played the sport on his own golf course, the Öschberghof, which he built in 1976. He also raised orchids.[4]