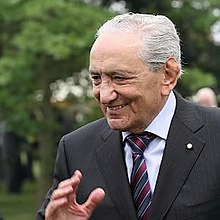 Michele Ferrero (Italian pronunciation: [miˈkɛːle ferˈrɛːro]; 26 April 1925 – 14 February 2015) was an Italian entrepreneur. He owned the chocolate manufacturer Ferrero SpA, Europe’s second largest confectionery company (at the time of his death),[3] which he developed from the small bakery and café of his father in Alba, Piedmont. His first big success was adding vegetable oil to the traditional gianduja paste to make the popular spread, Nutella.[4]

Michele Ferrero was born on 26 April 1925 in Dogliani,[5] the son of Pietro Ferrero, who founded the Ferrero company, and his wife Piera Cillario.[2]

He was the richest person in Italy, with a personal wealth of $26bn[1] surpassing Silvio Berlusconi in March 2008. In May 2014, the Bloomberg Billionaires Index listed Ferrero as the 20th richest person in the world.[7]

Ferrero married Maria Franca Fissolo in 1962, and they had two sons together, Giovanni Ferrero and Pietro Ferrero Jr.[2]