Hanno Soth was born in Bad Bramstedt, Germany to his father Detlef Soth, a barrister who emigrated with his family to Canada and later the United States, and mother Elke. Soth studied at the University of Hawaii and received a bachelor’s degree in Business from the University of Ottawa.

In 1995, Soth moved to Bali, Indonesia from Hawaii and formed the Hanno Group, which invests and develops real estate and operates high-end resorts. Soth founded C151 Resorts, properties that cater to wealthy travelers, celebrities and heads of state.

CAREER AS A DEVELOPER 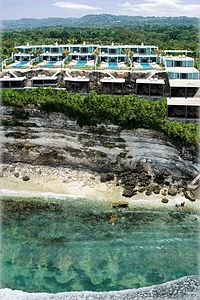 Soth founded the C151 brand of luxury villa developments, which continue to gain world recognition with numerous awards. Soth’s latest project, C151 Dreamland, won the 2011 Bloomberg International Hotel Award for Best New Hotel Design and Construction. Soth himself won the Pinnacle award from the World Anti-Aging Academy of Medicine (WAAM) for the resort and his work developing an innovative program integrating anti-aging analysis and treatments into luxury resorts. Soth continues to invest in, develop, and operate resort projects in Asia through his various companies. Current projects include the development of 11 private islands strategically located near Singapore in Indonesian waters.

Over the past decade and a half, Soth has accumulated much of his wealth through investing in Asian real estate. Beginning in 1997, Soth took advantage of dramatic devaluations in Asian currencies during the Asian Economic Crisis by buying large tracts of land at low prices. As currencies stabilized over the next decade and real estate values increased, Soth subdivided and developed many of his properties, allowing him and his companies to prosper.

Soth founded the Bali Visions Architecture Group (part of the Hanno Group). Among its projects, Bali Visions conceptualized and designed C151 developments (including its Onelife Plus Anti-Aging Clinic and Bintan Island project), winning a governmental award in 2007 for “Most Innovative Development.”

In 2000, Soth formed a construction company, Pt. Hanno Bali, part of the Hanno Group. Pt. Hanno Bali received the Citra Insani award from the Indonesian government in 2007, in recognition of its innovation and incorporation of technology in constructing C151 Smart Villa Resorts.

Soth’s C151 Resorts is a luxury hotel management brand with properties throughout Bali. C151 has won numerous awards, including the government’s top award for hotel service in 2011, and Luxury Villa of the Year (for the fourth time) in 2012.

Soth has been a major benefactor of one Bali’s most historic cultural sites, Pura Luhur Uluwatu Temple. In 1995, after the temple was struck by lightning and severely damaged, Soth funded part of the reconstruction, and has since continued to support its renovation and expansion.

In 1990, while living in Hawaii, Soth became entangled in a lengthy legal battle regarding his claim to an inheritance in the estate of Carmen C. Herbert. The case involved the First Church of Christ, Scientist in Honolulu and lasted over 10 years before being settled by the Supreme Court of Hawaii.